Discover the Truth About České Budějovice and Five Must-Dos 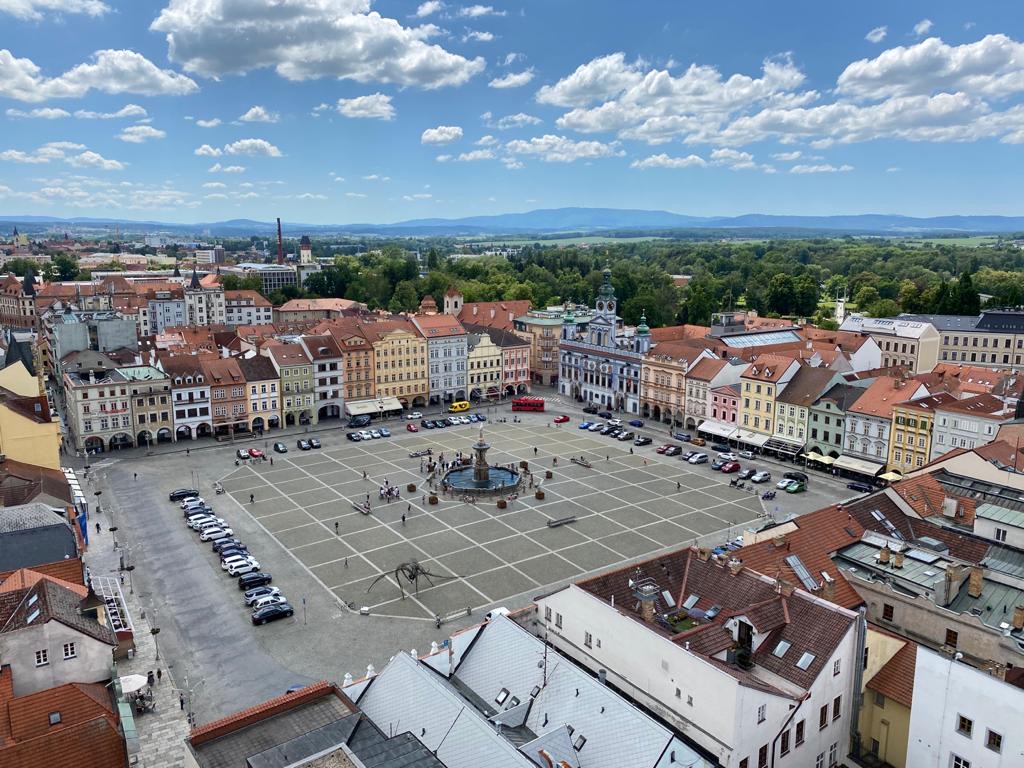 Ceske Budejovice is nestled down between the German and Austrian borders, just north of the hidden gem of Cesky Krumlov.

Being the capital city of southern bohemia, it has oodles of unique architecture, charm, and a controversial topic on none other than...beer. Digging in and discovering the truth about Ceske Budejovice is an essential add to any itinerary. It would truly peek the interest of my American readers, because this symbol did not originate in the good ol U.S. of A...

Hint: Budweiser - the King of Beers was not brewed in America. Ouch! The truth about Ceske Budejovice boasts the birthplace of "Budvar" in the heart of its town centuries ago.

Want to know the deep, dark truth? A full historical explanation can be found here.

A few other spots should be added to the sightseeing itinerary while researching the international mystery of Ceske Budejovice.

Located in the southwest corner of Otakar's square, the prominent bluish grey facade and baroque architecture will make you full stop. We were driving by, and I made hubby park so I could snap a photo. Truth be known, I snapped many a photo. But this was my fav. If time allows, hang out for a bit. Your ears will be filled with a delightfully, different tune on the hour from the clock tower.

Four gargantuan statues representing: justice, bravery, wisdom, and prudence are just a few major features of the 1387 structure. The many coat of arms are symbolic of Bohemia, Moravia, and Silesia. And the gargoyles are not to be missed. Just look up!

Every significant European town boasts a main square which was once the Old Town focal point. Bakers, musicians, butchers, banks, and hotels once lined the square. Nowadays, you will find cafes, bars, shops, and a few residential townhomes.

Don't miss the focal point of the square, Samson's fountain. It is the tallest in the Czech Republic and was constructed around the same time as the beautiful Town Hall. Grab a coffee and a seat on one of the many wooden benches and savor the moment. No better way to pass time.

Not to be missed! Rain or shine, I highly recommend the climb. Even with a four and six year old, it's doable. A fascinating story about the guard and his family who lived inside await you at the top. Can you believe they had a pet goat in the tower? The guard was required to ring the bell every day, but also notify people of fires. You can see and touch the multiple, gargantuan bells along the hike to the top.

After that satisfying hike of the Black Tower, head on over for the most flavorful ice cream in the world.

Guys, no lie...we've traveled all over the world, and this place had the best tasing ice cream I have ever consumed in my entire life. ZMRZ is an inconspicuous place off the beaten path, but trust me when I say - it is a MUST. We went based on a recommendation of a colleague, and I'm over the moon we added it to the itinerary.

Need more convincing? Over 100 Google reviews and 5- stars for this ice cream paradise. I ordered a simple chocolate, but the menu list an array of exotic flavors. You will NOT be disappointed!

But the #1 thing I recommend while traveling to new places? Discovering a local hang out. Občerstvení Malý Jez did the trick while in Ceske Budejovice.

This quirky beer garden is as local as they come with all-star reviews. Find a shady spot and enjoy a refreshing brew or ice cream before heading into the park.

Come to find out, a Pikador is the Czech version of an American hotdog. Instead of a sliced bun, these come solid. The chef will shove them over a metal pole carving out the inside. This makes a nice home for the hotdog and keeps it surprisingly warm. Of course, I slathered on the ketchup and washed it down with a Radler. We've also experienced hotdogs served like this in Iceland

After lunch, we scooted across the street to the park, Malý Jez. One of the best things to do when adventuring with kids is give them a chance...to be kids! Run, climb, swing, dig, and even swim. Since we were on a day trip from Cesky Krumlov, we packed their swim shorts just in case. Cheery little boys were very happy we did.

Take a minute to explore the frothy, delicious truth about Ceske Budejovice, but be sure to indulge the other parts of this enchanting city. Whether passing through to Cesky Krumlov or trekking onward to Prague, it is well worth a stopover or day trip!

Curious about more European gems? Don't miss out! Sign up below.